Posted at 16:24h in Featured, News by Dream Racer Boats

Class40, where does it come from ? 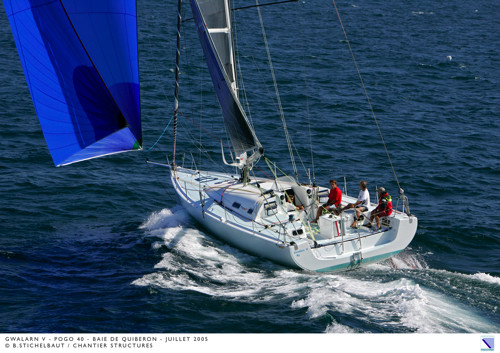 In 2004, skippers and architectes would like a monohull speeder than its predecessors.

Shipyards already have plans and drawings of 20 feet boats. This way, professionals and skilled fans gather around a new sailing program, which is allowing to cross the Atlantique, with more secure than before. 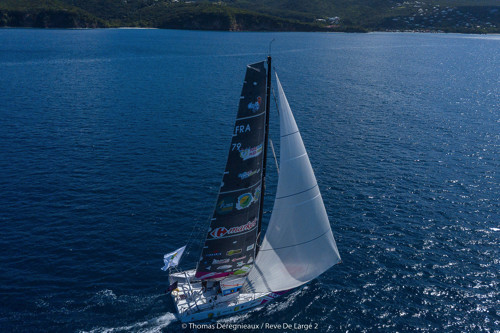 First presentation at the Nautic Boat Show in 2005, it is instantly a success. Very quickly, some skippers has participated at the Route du Rhum 2006 aboard a Class 40.  A third of the fleet in this race is represented by this new monohull. In 2007, barely two years after the presentation in Paris, 30 Class 40 started the Transat Jacques Vabre. The first Class40 to emerge from construction sites are the Pogo 40, Jumbo 40 and Akilaria. In 16 years, more than 150 sailboats in this category have been designed, and 22 nationalities represent it.

The Class 40 seduces a number of skippers, and fits into different races. Among these skippers whose names are not unknown, we find Florence Arthaud, Alex Benett, Ian Lipinski or Yoann Richomme and Louis Duc. The races in which the Class 40 is highlighted are mainly the Route du Rhum, the Transat Jacques Vabre or the Normandy Channel Race.

The Class 40 was designed for ocean racing, but not only for regattas. Indeed, because of its safety and its more accessible price than other high-performance sailboats, this monohull also targets experienced amateurs wishing to sail by combining cruise and performance.

Today, many original Class40 no longer compete. Today’s new boats are always faster and more innovative. But then, what is the future of the oldest ?

Class 40 : a second life with performance and a high grade finish

We imagined that these Class 40, here an Akilaria, could have a second life : a comfortable cruising sailboat, light to keep a maximum of speed, and with a design in the era of time.

To keep the race spirit, we borrowed “race” materials, such as carbon, we also kept materials evoking lightness such as polycarbonate. The latter, due to its translucency allows to keep the brightness through the spaces and brings a certain relief. We have imagined storage blocks and window frames in monochrome anthracite gray tones to accentuate the world of racing. In parallel, in order to feel comfortable and in a friendly atmosphere, we opted for a warm chromatic palette, such as orange fabrics, camel accessories, or some wooden furniture.

How to balance the space ?

For the interior design, the decision was made to reduce the number of seats on the bench by keeping only one element, but by adding removable places using stools that can be stored under the cokpit table. This table was drawing with a recycled plastic as tabletop. This material, also recyclable, gives a terrazzo effect, but with the advantage of lightness and the preservation of the environment. In front of this saloon, we find the galley, arranged in a linear way, and including the essential elements to take pleasure in a beautiful meal preparation after a day of sailing.

The chart table, fitted with all the necessary electronics, is located immediately to port after the descent into the cockpit in order to have quick access from the outside. It is a little bit separated from the living space by a polycarbonate screen with carbon finish edges. This little corner provides the isolation necessary for concentration. All the horizontal planes are fitted with fiddles, discreetly encrusted: relatively low but wider than usual. 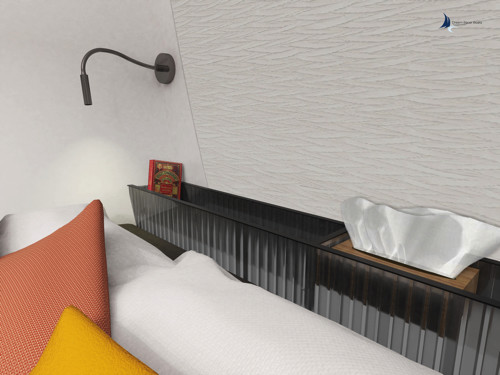 Finally, the bathroom : we used the existing WC space to draw, just next, the shower space. So we have a full shower room. We find a small seat next to the shower. It is the same inside the shower. A volume was dug to allow putting soaps and other bottles.

So, it is possible to give a second life to ocean racing yachts. Our company is there to meet your desires, offer you new solutions, and develop an eco-responsible use, both in materials and in manufacturing. The old Class40 have a promising future !