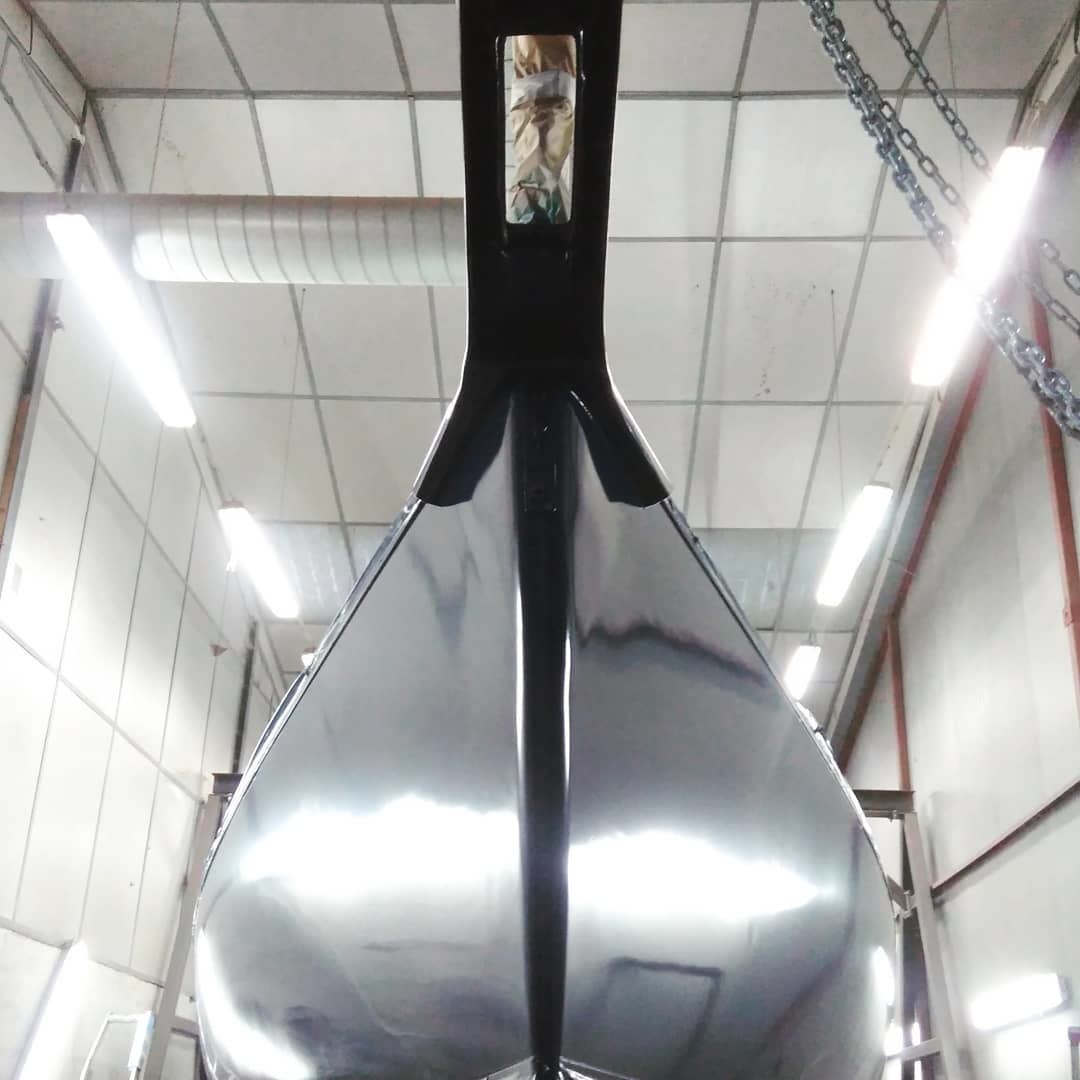 Posted at 17:16h in News by Dream Racer Boats

To find in the Official Guide of the Solitaire du Figaro 2018.

As soon as they arrive in the harbour at Saint-Gilles-Croix-de-Vie, where they were designed, the Figaro Bénéteau 2 boats will officially enter the wonderful world of retirement. What lies ahead for them ?

It is at number 16, Boulevard de la Mer in Saint-Gilles-Croix-de-Vie, that the Bénéteau Group has its headquarters.

When they get back home in early September, a chapter of ocean racing history will come to an and with the Figaro Bénéteau 2 boats left to be forgotten. The story ends. Thank you all and goodnight.

To be honest, how could anyone imagine getting rid of such a reliable boat.

Which has lasted well and performs brilliantly, if you take into account the various rules and one-design constraints ?

The market has clearly understood that. As there are already plenty of people interested. They will be looking for robustness and performance. The ease of getting underway and all things considered a very reasonable price in the market segment of 10m boats. Where prices rapidly reach six figures for racing cruisers.

If the future buyer is looking forward to using his Figaro Bénéteau 2 for cruiser-racing. They will need to send her into the yard to modify the boat. Where simplicity has always been the watchword.

It is well-known that a sailor can make do aboard with a simple bunk and ring to boil water. She will also have to go into the yard if the future owner wishes to use his boat with speed in mind. Because for reasons down to the one-design rules and the aim of making her robust, the power of a Figaro Bénéteau 2 was deliberately muzzled.

« We can easily gain a few knots, » admitted Eric Peron, who has already sold his boat to someone from Saint-Tropez. « The ballast tanks need to be removed, she needs to be delightened, whcih is easy enough to do, and maybe add one or two extra sails and even a bowsprit. It’s not that complicated to sail this boat even faster than when she was in Figaro mode. »

The race to find the right handicap

To ensure the safety of the sailors racing in the circuit, the Figaro Bénéteau 2 was deliberately designed not to perform to her full potential. Sheer performance was not what mattered, as it is not the vital element in one-design racing. What does matter on the other hand is that she fits in with the rules.

In her new life, the Figaro 2 will no longer be classed as a one-design boat, but she will need to satisfy class rules or a handicap system such as IRC, the Franco-British measurement system recognised by the internation federation, World Sailing, run by the Royal Ocean Racing Club (RORC) on the British side and the Union Nationale de la Course au Large (UNCL) on the French side. « IRC ranks various designs of keelboat to allow them to race against each other fairly, » explained the UNCL.

The coefficient is based on the physical measurements of the boat and not her performance.

A system of corrected time is then applied wherever they race around the world. This is known as the rating or TCC, which goes from 0.750 tpo 1.900. The higher the TCC, the higher the potentail speed of the boat.

For example, Alain Gautier prepared his Figaro Bénéteau 2 so that her rating went from 1.080 to 1.046 so that she could be sailed by Olivier Monin and Aymeric Belloir in the 207-2018 Transquadra. And it worked out well. Winner of the second leg between Madeira and Le Marin (Martinique), the pair won the Transquadra under corrected time, which is what really counts in IRC races. The French sailing federation has alreday awarded a certain number of Figaro Bénéteau 2 boats a rating of around 0.9550.

Soon to be superstars ?

Mico Bolo expects to see Figaro Bénéteau 2 boats in the races he takes care of (Transquadra, Course des îles…) in the near future. « They are, » explained the Race Director, « very good boats when sailing downwind, especiallu in a breeze. They are not expensive, fast and not that hard to get used to. To enter the transquadra circuit, they need to deal with the rating, but Alain Gautier has shown them the way ? I think that the boat has to be worked on like he did with the rigging which was modified a little. These boats are really capable of getting a good result, of they are sailed well. »

Guillaume Farsy also stresses that they need to be sailed well. A well-known skipper and preparateur, he has seen plenty of FigBen2 boat in his time. He knows that some are looking forward to these boats un the Transquadra, while they are feraed by others. « The rating will be high , » said Guillaume, « but as these boats are fast, that is quite normal. They are going to have to fight hard to win, but that is after all the principle when racing.

To race in IRC, it is possible to remove the ballast system, as this is banned in IRC rating ?

That means less weight, but who is going to complain, about that ? Buying a Figaro Bénéteau 2 means you are buying a reliable boat. Which has been worked on over the years, a set of sails and navigational tools. You just have to add in a computer, as the skipper is bound to want to take the little secrets with him that have made him successful during his career. »

Figaro Bénéteau 2 boats could also become the ideal boat for corporate races and team building operations. At Kaori, the event organiser and PR firm run by Laurence and Jacques Caraës, the Figaro Bénéteau 2 is one of the most talked about subjects at the moment.

« We organised some races, he won the first Trasat AG2R LA MONDIALE Lorient – Saint-Barth in 1992 with a certain Michel Desjoyeaux, edito’s note) wants to do it again. For people working in a company, it’s always a special moment when they set up a crew witha new skipper on a racing boat. »

Thibaud Ramond is a young materials engineer, who has specialised in the aeronautical sector. He had not yet finished his studies, when he started asking what becomes of racing boats at the end of their career. « One day, I saw an IMOCA stuck there on the hard in the harbour in Port-la-forêt. And I wondered what could be done with these boats, which are no longer in favour. While studying something abroad, I came across a company, which has a huge potential in refitting boats, particularly racing boats.

That’s how it all began.

« He was referring to the concept he has developed with his little company, Dream Racer Boats. Which today offers 3D designs of what I am capable of doing, I gave a new life to a Figaro 1. A very special boat, which has a unique place in French offshore racing. 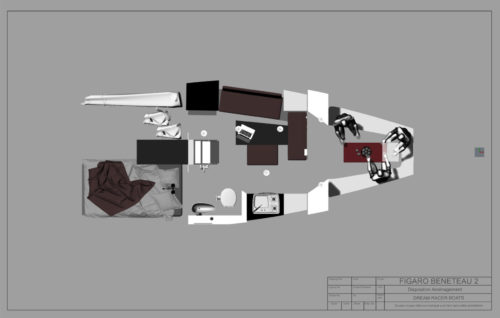 For the second generation, we’ll be ready to offer our services once the proposals are received, probably in early 2019.

Usually, I hear a lot of compliments about the Figaro Bénéteau boats. But there is one thing that is criticised : she’s a boat that pleases her skipper, but not the rest of the family.

The solution probably involves redesigning her interior to allow a family to sail away for the weekend. With a bit more comfort, sacrificing a bit of her performance capability.

« With the support of Jean Le Cam’s firm, Finistère Mer Vent, Thibaud Ramond decided to go with the times : his projects will be created in 3D (« that considerably cuts the margin for error »). And will come to life at the client’s location. My workshop is mobile, so that we can go and see the boat. This makes it much easier and it is not any more complicated carrying out the work. »

On the Figaro class website, the list of sellers resembles the rankings in a leg of the Solitaire between Quimperlé and Cadiz, or between Saint-Gilles-Croix-de-Vie and Kinsale.

Erwan Tabarly has announced he is selling his Armor Lux. While Xavier Macaire is basing his sales pitch around the fact that he was French elite offshore racing champion in 2015.

Team Vendée Formation is also up for sale with a strong argument in her favour : « The boat has never touched the bottom».  Anthony Marchand and Gildas Morvan also want to sell theirs ? Corentin Douguet and Nicolas Jossier are offering the added extra of coaching and help in getting used to their boats. That too is clearly an advantage ? « I am convinced, » said Eric Peron. Who is working alongside the boat’s new owner. « That the Figaro boats will please their owners. They are relatively easy to get going, but they are a little bit more complicated when you want to get 100 % from them. That’s why we spent so many hours training on them ».

Not all of them have withstood so well the onslaught of time. Some have disappeared. But the Figaro Bénéteau 1 boats have gone through a renaissance in popularity over the past few months.

A Facebook group, Figaro One, is starting to become « the place to be » for owners of the Figaro Bénéteau 1. A small class based in Deauville is gradually being reborn.

In spite of their vintage appeal and their below-par performance, the precursors are getting back in the water. Even the Half-Tonners, past ten years, are still adored by sailors. Paul Meilhat, 34, who races in the IMOCA class afgter going through the Figaro circuit, is after all tje owner of Domino’s Pizza, a Half-Tonner from 1983 designed by Humphreys, a boat the willingly lends to other skippers to race in the Tour du Finistère. It seems obvious that the Figaro Bénéteau 2 boats are not going to be pensioned off just yet.

The # 10 Figaro converted into true Cruiser-Performant

This morning, the Figaro 1 # 10 came out of the painting room. A new process applied! Dream Racer Boats wants to innovate at every step. Moving from interior design with eco-friendly materials and exceptional properties, to thermo coated chandeliers, until the application of a specific paint. Here is a taste of the boat out of the cabin : 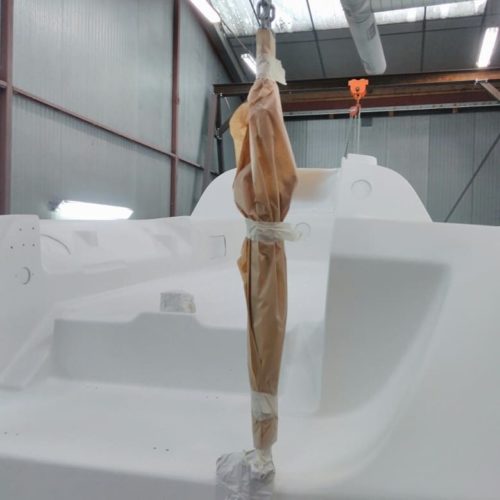 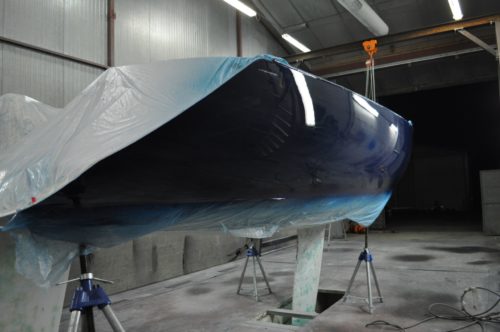