Posted at 10:18h in Featured, News by Dream Racer Boats

It is possible to combine originality, seduction and comfort while reducing waste! Discover our new product, the « Ottoman Iodé », with a racing hull, the IDB marine maxi 6.5. This seat was made for Finistère Mer Vent. 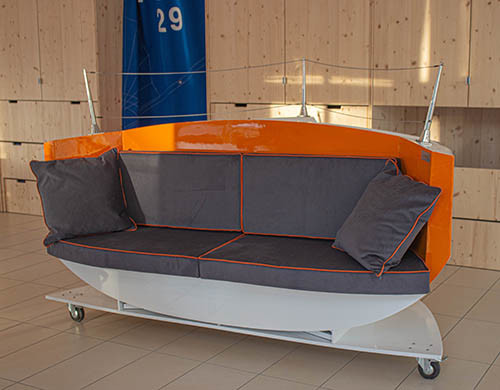 This cooperative society of collective interest wanted an original and welcoming object for its reception hall, reminiscent of the maritime domain.  This is why the idea of creating a seat in a bow in the colours of Finistère Mer Vent was adopted.

Finistère Mer Vent is an entrepreneurial and collaborative project based in Port-La-Forêt (south of Brittany). It was founded around an alliance between Crédit Agricole Banq, the community of municipalities of Fouesnant and the skipper Jean Le Cam. Its role is to support project leaders with the aim of developing the maritime economy. This is why Dream Racer Boats is proud to be part of this business incubator since its creation.

Finistère Mer Vent has joined the Sailing Valley. It is a unique concentration of know-how dedicated to ocean racing, which includes more than 200 companies and stretches from Finistère to Morbihan.

You can also find the seat in their totem building in the Forêt-Fouesnant.

The aim of Dream Racer Boats is to offer unique products. Therefore, our workshop customises different objects to satisfy your desires. Finistère Mer Vent had the idea of using a bow to create a seat with the company’s colours. This new product creates a warm atmosphere and is reminiscent of the maritime side of this company.

This seat, made from a maxi 6.50 IDB Marine hull by David RAISON, has been designed in our workshops. For the hull, you can opt for recycling by giving a boat a second life or you can choose a new hull that will be ecologically designed. On this seat, eco-responsible material is visible on the bilge of the bow, which is linen fibre.

The cushions are designed by a local producer (more precisely from Finistère), thanks to her little golden hands!  Moreover, we opt for the local business development which is better for our earth! She has a wide range of fabrics and her handmade products are made of high quality.

Concerning the colours, you are free to choose them. We can make virtual simulations to help you project yourself and thus better visualise your object.

Dream Racer Boats adapts to your projects and your desires to satisfy you.

Do you have a project? Your boat is old and worn out? You can’t sail with her anymore?

Dream Racer Boats gives a second life to racing boats by increasing their life cycle. So, a boat that can no longer sail can still be used! A personalised service is offered to you to create a unique product, customised to your requirements or simply to continue to give life to a boat with a history.