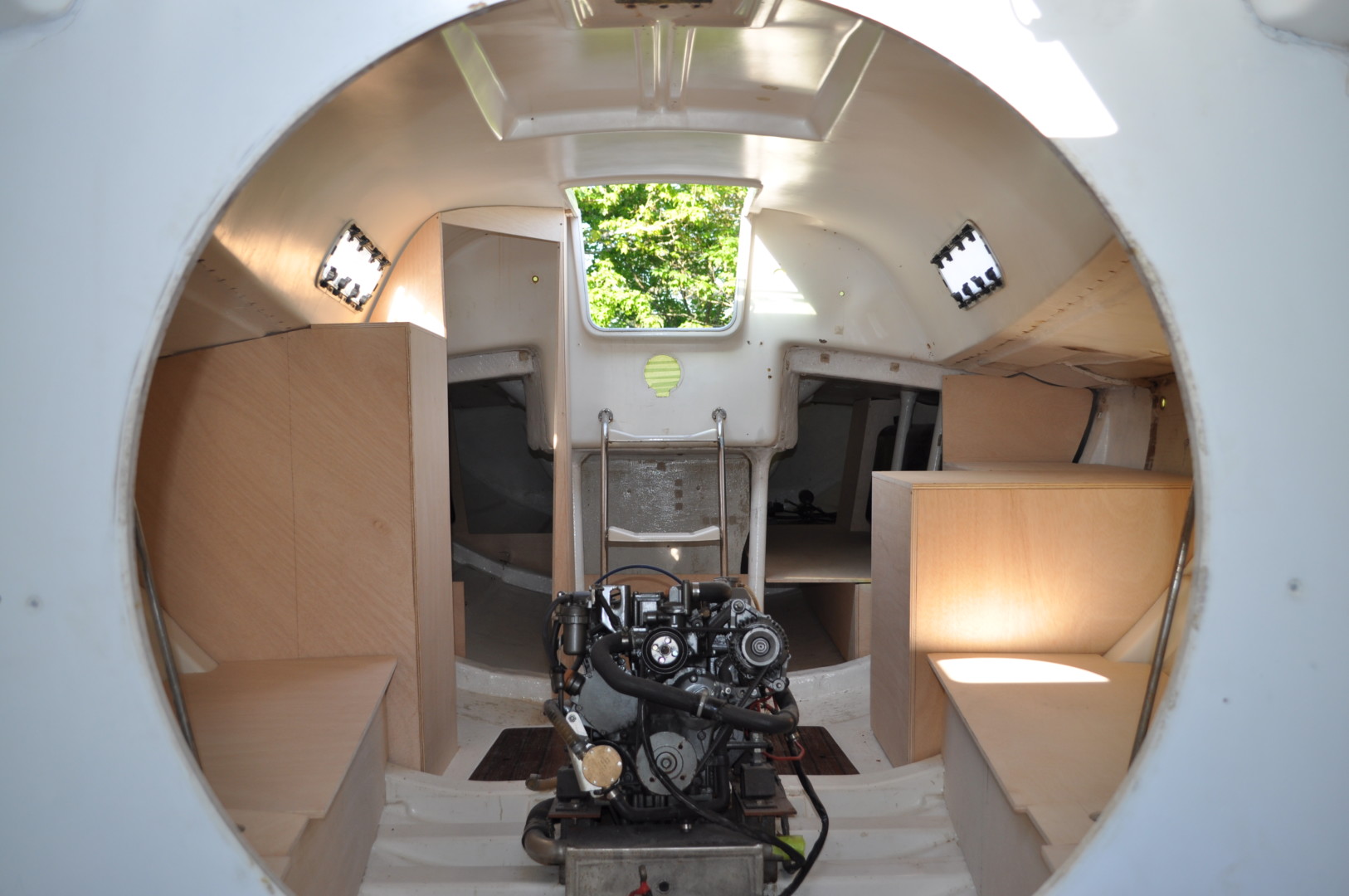 Posted at 16:00h in News by Dream Racer Boats

The Solitaire du Figaro will, for the first time, leave from Le Havre at the end of August 2018.

The Solitaire du Figaro 2018 will start from Le Havre, a first of a two-week trip via three stages taking part in September. The start of the 49th edition of this ocean race, which usually takes place in June, will be on August 26; and go on for some 1700 nautical miles (3150 km).

Le Havre, historic departure city of the Transat Jacques-Vabre (double race), will launch the festivities. The bay of Saint-Brieuc will host the 2nd stage before the fleet leaves for Spain and its port of Ría de Muros-Noia. The epilogue is then set in Saint-Gilles-Croix-de-Vie (Vendée), with a 24-hour loop, scheduled for the 13th of September.

Saint-Gilles-Croix-de-Vie was chosen to close the chapter of the Figaro 2, the boats on which sails the sailors of the Solitaire du Figaro, and which were built in this Vendean city. In 2019, the race will move on to the Figaro 3, a new model equipped with foils.

In 1970 the first edition of La Solitaire took place, although it was then called the race of Dawn because it was organized by the newspaper of the same name. In 1980, Le Figaro bought the event that now bears its name.

The founders Jean-Louis Guillemard and Jean-Michel Barrault wanted to create a solo race with two stages and without assistance, which would be open to both the best professionals as well as amateurs. Over the years, it has become one of the most prestigious sailing races in France.

Initially, all types of boats participated. However, after 1980, the race was passed on to Half Tonners prototypes originally designed for the crew race. In 1991, a new course was created with the arrival of Figaro Bénéteau I, specially designed by Jean-Marie Finot for the solo race. In 2003 a new boat was chosen, longer and more powerful. Namely, the Figaro Bénéteau 2 which is still active today.

The race, historically, always takes its departure from France with a total course between 1,500 and 2,000 miles. Although, every year the Solitaire URGO Le Figaro also makes stops in foreign countries, especially Spain, Ireland and Great Britain.

The Solitaire Urgo Le Figaro is a one-design and unattended race, by steps. Each step is a race. The ranking at the time of each stage, as well as the general classification at the time, gives points to the French Elite Offshore Racing Championship.

STEP CLASSIFICATION: A ranking will be established at the end of each stage according to the race time, after addition of any penalties or bonuses.

GENERAL CLASSIFICATION : The overall classification will be based on the cumulative times of the stage rankings at the end of the event. The boat with the lowest cumulative time will be declared the winner.

CLASSIFICATION BENETEAU BIZUTH: A time classification of participating skippers for the first time will be established at the end of each stage. The boat with the lowest cumulative time will be declared the winner.

CLASSIFICATION RADIO FRANCE: The price Radio France rewards the boat in the lead during the passage of the buoy Radio France, it is about 1:30 after the start. The classification is established according to the order of passage to the buoy. The first 10 boats will receive points according to regressive system (10 pts for 1st, 9 pts for 2nd … no points beyond 10th). The boat with the most points will be declared the winner.

The route for this last edition 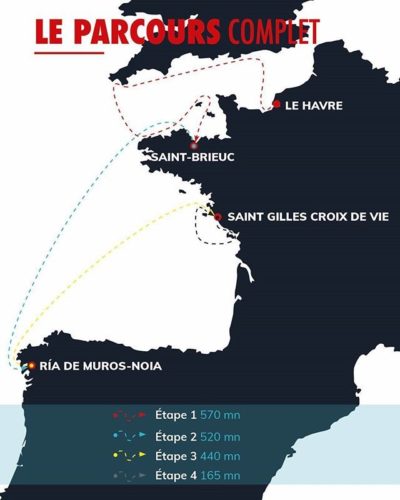 For further informations go to : https://www.lasolitaire-urgo.com/the_race

The feeling of Sébastien

Sebastien Simon tells us today about his feelings for the race The Solitaire URGO Le Figaro, final stage and flagship of the French Championship of Offshore Racing which will leave Le Havre on August 26th. 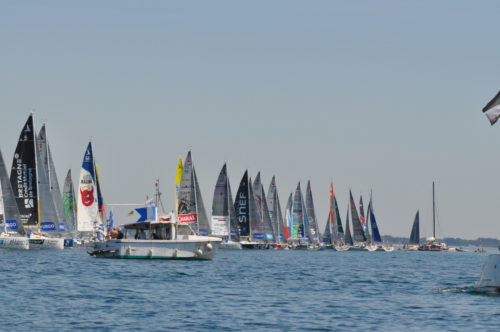 “I want to win! Although it’s a tough race, since you have to be consistent in 4 stages. Everything is on stake from the first one, and it can be difficult to stay focused if you start badly.I feel it’s a good year for me, and I want to make a great performance. I really want the title of being the French champion and it’s after the Solitaire URGO Le Figaro that we will know who won it, so it’s a very important race for me.”

For more informations go to : http://www.bretagnecmb-voile.fr/

The future of Figaro 2 ? 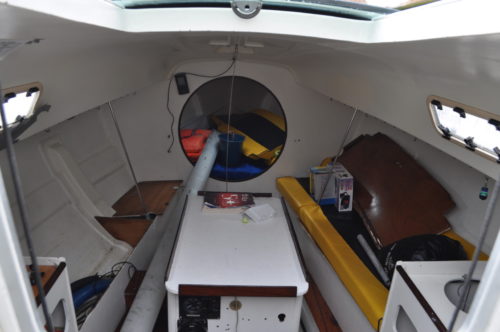 Interior layout of a Figaro I before the refit

What happens to racing boats once their career is over? Some continue to sail occasionally, others end up abandoned on a platform or in a garden.

Thibaud Ramond offers them another destiny: a refit to revive them into comfortable cruisers.

Inside a shed in Trégunc, a Figaro 1 is stored. The only thing remaining is the hull. “I removed everything else. Now, it must be redeveloped entirely. There is work to do! “, explains Thibaud Ramond with a laugh, the founder of Dream Racer Boats. The concept of this young company is to transform racing boats (in this case the Figaro) into cruise ships. Giving them a new career, sort of.

The idea emerged while Thibaud Ramond was working in shipyards in Australia and New Zealand.The materials engineer specifies:

“I decided to go to work three years abroad to acquire technical knowledge: composite, electronics, embedded systems … I participated in the production of 32 carbon canoes for the World Championship in Australia as well as the refit of several cruise ships.”

He returned to France in June 2017 and set up his business six months later. Dream Racer Boats has since then acquired a Figaro 1 built in 1990. After a successful sports career, this boat has passed through the hands of several owners who have forsaken it, because of the lack of comfort.

Thibaud Ramond will completely rearrange it and give it a cabin at the front and two others at the back, a square, a toilet and a kitchen. “The comfort was very very spartan. I am going to make it into a very comfortable and high-end cruise ship, that can now be used by a couple with children, or a group of friends, for example” says the entrepreneur. 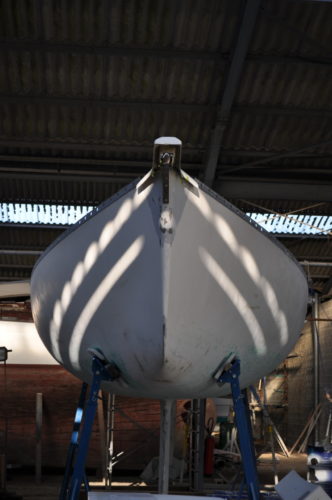 Custom-made fiberglass bow nose in order to bring : comfort, pleasure and security on board.

This boat should be exhibited at the Crouesty Boat Show in early November, and will later be sold. Thibaud Ramond mainly targets the Figaro 2 fleet because it will be replaced in 2019 by a new version: the Figaro 3. Béneteau has built 98 Figaro 2 monohulls.

We will offer a tailor-made vessel, with high-end materials whom are innovative and bio-sourced if possible… Although, this is made with care, not wanting to disturb the exceptional performance of this boat.

Dream racer boats plans, moreover, to move to the home port of its customers to carry out the work.